Glyfada Beach Villas & Restaurant · How do they celebrate Easter in Greece?

After Christmas, if there is any other festival that is celebrated with full enthusiasm and courage by the entire Christian community across the world is Easter. The festival is organized to commemorate the rebirth of the Lord Jesus, after his crucifixion on Good Friday. But, the way Easter is celebrated in Greece it is not celebrated in any country of the world.

The spirit of celebrating Easter which is seen in the Greek Islands is not found even in the whole country. The seven days prior to the arrival of Easter are known as Holy Week during which different types of celebrations are made by the natives of the islands.

The series of these ceremonies begin from 11.00 a.m. onwards on Palm Sunday reiterate the Holy Shrine of Saint Spyridon to acknowledge the sincere efforts made by him from protecting the island from the impacts of fatal plague in 1629. The size and the length of the litany are quite bigger and move across the path of old Venetian city boundaries.

The function is joined by all the Philharmonics of Ionian Island to express their respect and honour towards the Patron Saint of Corfu. During the night of Palm Sunday, a concert is organized by the Philharmonic to inspire passion and feelings to celebrate the full Holy Week with full courage and enthusiasm.

Eastern in Greece and Corfu are celebrated under normal circumstances. This year (i.e. 2020) Greece is in lockdown because of the Covid-19 and Eastern is only celebrated at home.

Good Monday: On Monday all the people go to market to buy the items that will be used to make the arrangements for celebrating different days of the week with fun and happiness. Some of the common items brought by the people are aromas of baking ‘foyatsa’ to decorate the red egg and ‘mandolato’ an item made from the combination of almond and honey.

Good Tuesday: On the afternoon of holy Tuesday, all the people go to city churches for prayers and listen to the story of Mary Magdalene. While in the afternoon people benefit by the holy stories, in the night Music and Poetry Night is organized at the Peristyle of the Old Palace. The theme of this night is “From Golgotha to Resurrection”. 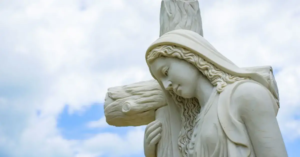 Good Wednesday: During the afternoon of the Good Wednesday the natives of Corfu participate in the Holy Unction. Then again at 8.30 p.m. all of them unite at the Municipal Theatre to listen to the Municipal Chorus sung in the memory of Lord Jesus.

Good Thursday: The arrival of Good Thursday means, that now the day has come to dye all the Easter eggs red, to symbolize the rebirth of nature and life. The information regarding this is given by ringing the bell. However, this activity begins after the lighting of 12 candles in the Duomo, the Catholic Cathedral. It would be important to mention that all these 12 candles are not lit at the same time, but each of them is lit separately after reading the 12 Gospels. 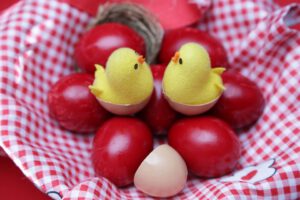 The funereal bells are played to awake the people and the ecclesiastical ceremonies are organized to commemorate the activity of removing the Christ from the Cross. The Epitaphs are decorated by the young girls, this activity begins in the afternoon followed by the music played by the choruses and bands. Finally, around 10.00 p.m, the last Epitaph, which is well-decorated makes its appearance in front of the crowd. This Epitaph is from Corfu Cathedral.

Around 6.00 a.m. all the people unite in the church of the Virgin Mary of Ksenon, to recreate a situation of an earthquake that in actual at the time of Christ’s Resurrection. The announcement regarding the first resurrection is made around 11.00 a.m which is followed by the phrase “Christós Anésti” uttered by the people telling each other that Christ has waked-up. This is responded by the phrase “Alithós Anésti” confirming the re-born of Christ. It is believed that this reply came from the sky.

After this, the final series of celebrations begin in the form of “Christós Anésti” followed by the huge sound of pealing bells and sounds of the bands moving across the streets. People also throw the clay pots from the windows with a belief that the sound created by the breaking of the pots will kick out the evil soul from the country. 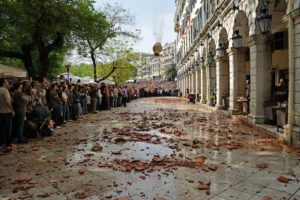 During the night people attend the functions organized at Catholic Mass of the Resurrection in Duomo, or the Orthodox Resurrection Service at “Páno Platía” (Upper Square). Both the places are decorated with thousands of lit candles placed on window sills, balconies of the houses or hold by the people coming in the function. At sharp 12.00 night, the arrival of Christ is celebrated with huge sounds of drums and fireworks.

On Good Sunday Or Easter

The Sunday or the day of Easter is celebrated by partying at home, after prayers in the Church. However, the festivities are organized throughout the island, yet people visit the houses of their relatives, friends, and neighbors to greet each other. The celebrations are organized till late-night, without any concern about waking up early on Monday morning, due to government holiday.

As Easter is an important festival in Greece and celebrated with more courage and happiness than compared to Christmas, it is equally attended by people of all age groups whether they are old or young. It would not be wrong to say that this festival eliminates the difference in ages between the generations.